This documentation is for the legacy Izenda 6 product. Documentation for the new Izenda 7 product can be found at https://www.izenda.com/docs/

There is no single life-cycle of caching in Izenda. There are several caches which act simultaneously and independently on each other, the 'cycle' will always be different depending on your given Izenda usage scenario.

However, each cache has an individual life-cycle that exists and is rather strict.

Below is a description of the caches existing in Izenda along with a brief life-cycle for each of them.

"Internal": Constructs the schema from the scratch

"External": Wrapper which tries to get somewhere ready schema object. If it fails, it calls "Internal" one.

There are two independent caches - one for each action.

As you can see, it can either return the existing schema object from some cache, or can decide to call "Internal" action represented by method ExtractSchema.

When ExtractSchema is called, it does following:

This one is very simple.

When GetDataSet executes (it accepts IDbCommand and returns DataSet object), internally it does following:

This cache, as you can see, acts completely independently on all other caches, for example independently on mentioned above schema-related cache. It allows to avoid repeating execution of slow SQL commands, and its effect is especially noticeable for example when you have reportset with very slow query to obtain results for rendering results.

Another completely stand-alone, independent on other things cache.

It stores objects used to render ReportList for existing reports. For every reportSet it keeps 3 objects: ReportSet XML definition, thumbnail (if exists), and html Form (if exists).

Logics of its work is rather complex in small details, but in general it does following.

This cache is also rather simple.

If ReportSet is not found, then it will load XML definition and deserialize it. Then put result to Application, and also return it.

While if ReportSet will be found in Application - it will return it, skipping loading and deserialization of XML.

Note that if given cache misses ReportSet in Application and loads XML for deserialization - then it will be a time for mentioned above "Cache for ReportList" - which keeps ReportSet XMLs in memory along with Forms/thumbnails.

So as you can see, though these caches are completely independent by the functionality and can be independently enabled/disabled, they are "nested" - if given cache fails, then there is a chance for "Cache for ReportList" to fire during the XML loading.

Very complicated internally, but rather simple in its external appearance cache.

It "intercepts" reportSet rendering in the moment before SQL generation, and verifies if there is already rendered HTML result for the given reportSet/situation in the cache. If it "decides" that it has the readt rendered HTML result - it cancels whole following reportSet processing (SQL generation, execution, HTML rendering) and jumps right to the point where HTML should be used (returning to browser for example) providing there the HTML from storage.

If ready HTML was not found in storage, it allows full necessary reportSet processing, and in the end of it puts to storage the prepared HTML result for further usage in case if the same reportSet will be required to be rendered in same circumstances.

This cache is mainly implemented in ResponseServer. It caches images/css/js files queried by user (browser), if StoreImagesToCache is enabled.

1) There is a persistent cache on disk.

2) There is an application-wide schema object in static memory in server process.

Both 1 and 2 above are shared across site users.

3) When VisibleDatasources gets some array of names assigned, the following occurs:

a) Izenda runs through the assigned array of datasource names, and throws away all those which are already present in schema object in static memory (thus are already available in system for reporting purposes).

If schema data is found in disk cache for a given datasource, then it gets filled with that data, added to in-memory schema object (becoming available in system for reporting), and discarded from the array of assigned datasources.

c) The remaining datasources are not present in schema object in-memory, and also don't have schema data in disk cache, so Izenda must pull their data from DB. Izenda generates a temporary table with names of these datasources (starting with "#datasources_"), and runs several SQL queries to pull schema data for them from DB. Then Izenda fills the in-memory schema object with this data and also stores this data to schema cache.

So if in the future after server restart, some of these datasources are assigned to VisibleDatasources, Izenda will take their data from disk cache without hitting DB.

There are a bunch of other tiny local caches within Izenda, which don't interact with users/developers directly, and are not regulated by any settings/conditions. Actually they often represent just a private non-persistent variable or collection in some class, so aren't worth mentioning in detail.

While 6 most important and global caches are described above. We have also tried to draw some a kind of schema which shows which data goes between those 6 caches, DB, and the main Izenda pages (ReportList/ReportViewer/ReportDesigner).

If cache doesn't find data - then it requests this data through the arrow "incoming" into its figure from the previous block. When previous block produces this data, cache stores it and also sends it to the successive block through "outgoing" arrow.

So there is no any kind of "full cycle of data flow" through all these arrows each time when user does something. Instead, each of these caches work like buffer/accumulator/floodgate - each of them acts independently in the data flow into which it is inserted, either returning previously cached data with prevention of "deeper" blocks work. Or if data is not cached yet - then it passes execution to the "deeper" blocks of code which should produce necessary data. 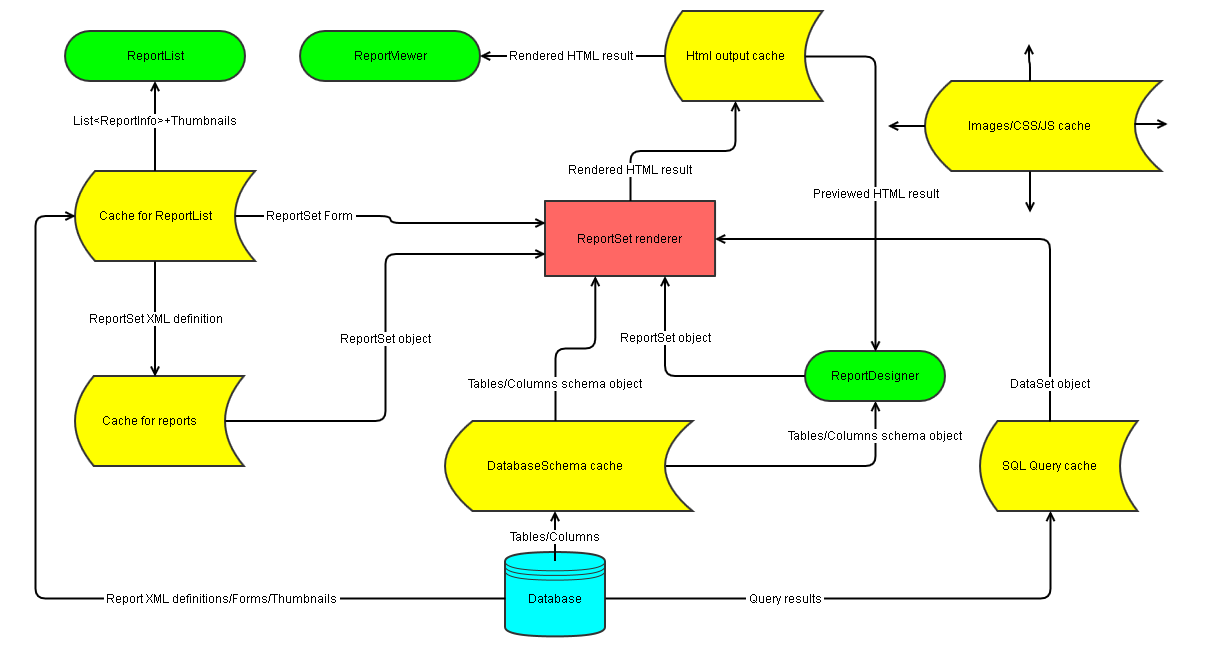